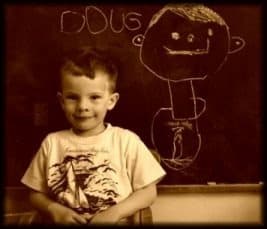 We are me…Doug Compton. The pic here was taken by my dad, a photographer by trade, sometime near the end of the 1950s. A few years later, now I am a cartoonist and animator living in the rugged rocky foothills of the Kittatinny Mountains of northwestern New Jersey, USA.

I grew up in New Jersey in the 60s (lived in Riverdale N.Y. on the Hudson river for a couple years too) and in 1971 graduated High School and left home on an amazing cross country journey in my ’67 Mustang. Over the next few years, I sold the Mustang, but traveled extensively by thumb back and forth across America to California, to New Mexico, to Florida…and eventually ended up back in my home state of New Jersey, where I decided to get serious, stop selling my blood for a living and get a career. Since becoming a professional like a doctor or lawyer or accountant or such would have required long hard hours of toil and study (things I was definitely never accustomed to),I decided to try and do the thing I loved and that always came naturally to me, drawing cartoons.

I’ll never forget the thrill I had as a child when watching those great Disney films on the big screen. The sight of the crocodile crashing Captain Hook through the wall of Skull Rock…Monstro the Whale bearing down relentlessly on Pinnochio and Geppetto…Maleficent’s transformation into an enormous Dragon…The Tyrannosaur and Stegosaur battle in Fantasia…(I had a thing for Dinosaurs…in school one year they called me “Dinosaur Doug”) and let’s not forget the “funny” cartoons on TV. To this day Bugs Bunny and Popeye(the Fleisher version of course) remain my favorite cartoon characters. And to be fair, while I frown on the work of Hanna-Barbara today, it was The Flintstones (again my fascination with dinosaurs coming into play) that really got me to drawing. One day my mom got me to draw Fred Flintstone for some visiting adult friends, and their genuinely amazed praise was addictive. I found myself to be an artist.

In 1975, while attending the School of Visual Arts in New York City, I landed a job as a messenger at a commercial animation studio, Phil Kimmelman and Associates. While running all over Manhattan I learned all the aspects of the commercial animation business, the agencies, the artists, the cameramen, the film labs…and within 6 months I was doing limited animation for a TV special.

I continued doing animation work at PK&A, and running messages in between, until 1978 when I joined Perpetual Motion Pictures as a full fledged animation artist. In 1980 the company divided and I went freelance, working for different studios in New York, and eventually expanding my clientele to include studios in other cities.

I call my company Karmatoons, well…because I guess over the years I have learned the laws of karma and how they work. I believe karma to be a definite and tangible force. When you do something that harms someone, or even if you simply tell a lie, there will be a time when that negative act comes back at you. Maybe not directly, but in some way shape or form. It merely takes an intelligent observation of one’s own acts and their consequences to see that this is so. Anyway, I thought it was a cool name.