their youths.That was the first commercial I ever fully animated myself in 1981 for Perpetual Motion Pictures in New York. I also animated on several “Berenstain Bears” TV specials.

When the company dissolved in 1981, I formed The Karmatoon company, a freelance animation business.

The early years of the Karmatoon company were bleak. It wasn’t until I met Mike Sporn ,an animation film producer in New York who did numerous specials for HBO, that things started to take off for us. With Mike, I animated on such projects as “Santa Bear’s High Flying Adventure”, starring the voices of John Malkovitch and Kelly McGillis(1987), The Dancing Frog, narrated by Amanda Plummer(1989), Abel’s Island, starring the voice of Tim curry as Abel(1988), The red Shoes,narrated by Ossie Davis(1989), and Mike Mulligan and his Steam Shovel, narrated by robert Klein(1990).

Then in 1990 I animated the opening sequence for the MTV 1/2 Hour comedy Hour ,which depicted a scrawny, loud-mouthed stand-up-comedian character being crushed by the falling MTV satellite with traditional cartoon violence. This caught the attention of Warner Bros. cartoon director Greg Ford, who allowed me to work with one of my all time favorite characters,Bugs Bunny. My first venture into the world of animating classic characters was on “Bugs Bunny’s 50th Birthday Special”(1990). Soon to follow was the TV “compilation” special, “Bugs Bunny’s Overtures To Disaster”, and then in 1991, I worked with Bugs, Elmer Fudd, Daffy Duck, and Yosemite Sam in the original cartoons, “Invasion Of the Bunny Snatchers” and “Blooper Bunny”. “Invasion” is available on the video cassette, “Bugs Bunny’s creature Features”. The latter, “Blooper Bunny”, was shelved by Warner Bros. after production for unexplained reasons. Finally after 6 years it was released to the cartoon Network for airing starting Friday, the 13th of June, 1997.The cartoon is an “outtake” reel from the production of the fictitious Bug’s “50th and 1/2 Anniversary Special”, featuring an amazing “tracking” shot through the animated studio as cartoon characters rehearse that looks as if it were shot with a hand held camera. I animated the main dance sequence that the “outtakes” are based on.

Here’s some things we’ve worked on for various studios: 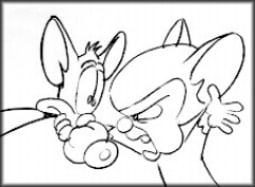 Invasion Of the Bunny Snatchers (1991)

Pinky and the Brain (1997) storyboards for the episodes: Mice Don’t Dance, Brain Storm,  You Said A Mouseful, and The Family That Narfs Together, Poits Together

I also did drawings for a series of Olympics related trading cards in 1996 featuring the classic Warners cartoon characters in various Olympic competitions.

Doug can’t Dance (1990) the original pilot for “Doug” I animated Doug’s fantasy of being a “great dancer”. I also animated the thing in the end titles where Doug and his dog, Porkchop, are waving goodbye. Artman (1991) the animated opening for Nickleodeon’s new “Nicktoons” The Angry Beavers (1997)A brand new series as of this writing…I worked on the opening. Our work for Nick also includes storyboard work on the series “Doug” and “Sniz and Fondue”RALPH BAKSHI

Malcom and Melvin (1995) Babe,He calls Me (1995) These 2 cartoons were produced by The cartoon Network for their “What-a-cartoon” series. They were animated entirely by Ralph and I.

Spicy city (1997) This is an animated series produced by Ralph for HBO. It was shown in the summer of 1997. I storyboarded two of the episodes, “Sex Drive” and “The Hands of Mano Mantillo”

To see some of my work for Ralph Bakshi click here

OTHER THINGS WORTH MENTIONING

We won the best animation prize for JJ Sedelmaier Prods. in 1992 for the 7up commercial “Field of Dreams”, featuring Fido Dido

“Floog-a-Tron”, a musical education series for the Disney channel

Saturday Night Live’s TV Funhouse , the animated shorts that were written by Robert Smigel and produced by Dave Wachtenheim and Robert Marianetti. I helped out with the animation on over 15 of these. After the writer’s strike of 2007 SNL dropped the cartoons from it’s lineup. If anyone wants to see them made again try bugging Lorne Michaels!

Through the New York studio Asterisk, helmed by Richard O’Connor and Brian O’Connell, I got to animate sequences for the feature films The Stepford Wives, 2004 and The Private Lives Of Pippa Lee, 2009.

Click on the image to see! This won 3rd prize Commercial Catagory in ASIFA East’s 2010 competition even though it’s not a real product.