When I went to visit Ralph for the first time at his beautiful home in New York state he showed me some of his prized collections of early comic art which included originals of George Herriman’s Krazy Kat. He also showed me some of his own creations from his early days, the Herrimanesque characters Melvin and Malcolm , who spoke in the succinct sentences common to the comic strip characters of the 20s. His concept for the short cartoons we would make was that they would recall the pop stylings of the 20s cartoons. They would have a progressive storyline that would grow more abstract with each cartoon. They were to be, as ralph envisioned them, jazz cartoons, hence the name Bakshi Zootoons.

I drove home from Ralph’s and immediately set to work taking his early drawings of Melvin, the pathetic clown around which the action revolves, and adapting them to designs for animation. I faxed the drawings to Ralph and he called me back gushing with praise, pronouncing me a “true cartoonist”. I took this to heart and decided from then on to endeavor to be worthy of this pronouncement. 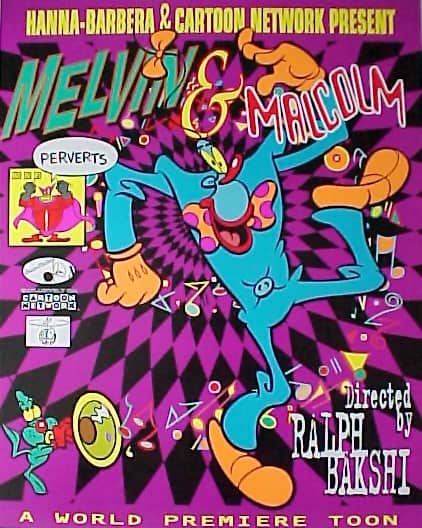 In the text below, the character’s names link to my drawings of them.

Ralph and I animated about half each of the first cartoon from his storyboard. It’s central character is  Melvin , a pathetic buffoon who wants to be hip and famous.

The world is cruel to him however, the hipsters will not let him play with them, and when he offers to help diaper a baby rock star he is called a pervert and attacked mercilessly by the self righteous “hero” Batlaw. Groveling home, Melvin suffers a nervous breakdown and decides to kill himself.

He sends his mama, Mrs. Melvin , a goodbye note, inspiring mama to sing the blues, which immediately hurls her into celebrity, fame and fortune. As she is interviewed on a talk show, Melvin prepares to throw himself out the window , using a toilet bowl as an anchor. Malcolm , a cockroach who shares Melvin’s apartment, observing the “oppressor” about to jump to his doom, decides to “play him a goodbye song” on his trumpet. He begins to play a hot jazz lick.

The cockroach’s music is so enchanting that Melvin, hearing it, decides life is worth living after all. He tells Malcolm, “you saved my life!” but the roach’s song has also been heard by the girl downstairs who comes pounding at the door panting, “I’m in LOVE with the person playing that MUSIC!!”.

Melvin immediately takes credit for the music, deciding that he can fool the girl by pretending to play the trumpet with Malcolm hidden inside his mouth. Malcolm reluctantly agrees to go along with this, (“OK, OK, just don’t STEP on me, man!”) and the girl is thrown into a sexual frenzy as Malcolm plays inside Melvin’s mouth. Unfortunately Malcolm does not have the stamina to play long enough to satisfy the lass and the music suddenly stops. “I feel so USED!”, she says and storms out of Melvin’s apartment.

Furious at the cockroach, Melvin crushes him in his teeth ,then suddenly is ridden with guilt as the other cockroaches in the apartment turn their accusing eyes toward him. They sentence Melvin to be “tickled to death” and swarm  up his legs and over his body.

As Melvin is about to laugh his last suddenly Mrs. Melvin appears on the TV singing the blues and attracting all the roaches from Melvin. Malcolm reappears miraculously at the end and offers to be Melvin’s friend. “I…have a …FRIEND?”, says Melvin through tears of joy, and the two of them dance off down the street, Malcolm playing his horn and dozens of women chasing after them.